skip to main | skip to sidebar

We have landed in Japan, Yokota AFB to be specific. We are located about an hour away from Tokyo and while we are technically on an American AFB, we still have to drive on the left side of the road and obey all traffic signals accordingly. It makes perfect sense inasmuch as soon as you leave the base, you have to obey the Japanese traffic signals and rules anyway. Mary, Laura and Sarah are taking Japanese classes as well as the usual in order to graduate from the Department of Defense school system. School information can be found at: http://yhs.pac.dodea.edu/

While we will hit the ‘week in Japan’ mark sometime this afternoon, in some ways, it seems like a month. We stayed in the temporary living facility (Military version of a hotel) then moved into permanent housing on Friday. It was a rush job and totally unexpected since the girls were in school, I packed up their items and got us moved (with the help of two co workers) before a penalty could be assessed and also, this allowed us to get Kita, our family dog to come live with us as well. Girls and dog are doing fine.

Sarah is practicing with the volleyball team and is excited by the prospect of really adding some height to the team. I don’t think even Sarah knows what she is capable of until she gets into the game and see what awaits her.

Mary and Laura have adapted to the school spirit by wearing school colors, a t-shirt adapted by themselves with scarves reflecting the school colors as well as scrunchies for their hair. The principal introduced himself to me at the end of the school day on Friday and wanted to see the father. He referred to Mary, Laura and Sarah as ‘high-achievers’ and is excited to have them in the school system.

As a side note, the Colonel (AF) who I work for has a freshman boy who plays on the football team. His son told him that the whole football team is talking about the ‘twins’. Now that would be expected if you are in a small school. The senior class is about 60 students. Sarah is getting her fair share of attention and it is wonderful to see how this is all coming together. Sarah appears to ‘tower’ over the Japanese registrar and other assistants at the school. No wonder they want her for volleyball and basketball! At the time of my writing this, it is 1130 on Monday which makes it 2230 Sunday.

We are 11 hours ahead of Indiana and 15 hours ahead of Utah. Please keep that in mind if you are calling. We will have a US phone number that will be considered a 'local' call for you.

All mail is being forwarded from our Indiana address so please expect a little delay in our responses. Costs of mailing letters is the same as if mailed stateside. Do not put the word “JAPAN” on our address as it is considered a US address. In fact, if you do put Japan on the envelope, there is the possibility that it either won’t go or they will attempt to charge you 98 cents instead of 44 for a typical letter.

Kita, the family dog has made it her point to get everyone to love her and therefore, the one Chief Master Sergeant (AirForce) and his daughter were a little reluctant to give back our dog once we were in housing that would allow dogs. I don’t think we will have any problem having someone watch Kita if there are any overnight trips. We may get a chance to watch the girls play various sports or programs that are distant to the base.

I’ve got to get used to driving on the left side of the road. The turn signal is also on the right side of the steering wheel. I was told that they way you know new people are driving is if the windshield wiper is going on a sunny day. Luckily for me, the first four days were rainy, so when I made a mistake, no one could tell! I still occasionally make that mistake. The Chief and I took the girls (he has a 15yr daughter) off base to a simple Japanese shop where the sushi and other foods traveled on a conveyor belt and you simply took off what you wanted or needed and the color of the plate that you took determined the cost of the food.

Here is the kicker: Exchange rate is 88 yen per one US Dollar! That means the one yen coin (aluminum) is technically more valuable than the one copper US penny!!!

In perspective, the exchange rate was 279 per one US dollar on my mission, but it came down to 135 yen per US dollar by the end of my mission. When Dad was stationed in Japan in the 60s, it was 366 yen per one US dollar. Everything is infinitely more expensive now. In fact, a $2.00 bag of potatoes cost $8.00 in the commissary because the potato crop had problems this year.

Tachikawa is the old place where mom and dad were stationed on their last tour of Japan for three years. This is the only place in Japan that I remember as a child. I also remember flying on the airplane that took us to Japan. At that time, it was the year before kindergarten, kindergarten and first grade for me. Yet, I still remember quite a bit even at that age. To this day, whenever I am in a flower shop, I can’t help, but think of the flower shops that we frequented as a child in order to purchase fireworks in Japan. Regardless, Tachikawa is three train stops down from where we live. According to the people who have been here the longest, one would not recognize the place at all. There might be one old water tower that is still there, but not much else. There is no longer a runway, but a large park and a great deal of shopping. The place is known for its variety of shops that are now located in the area.

Food: Not much different for food since we shop on base at the commissary, but the variety of Japanese food available there is in great abundance. My favorite fruit is the NASHI, which is kind of a pear apple and I fell in love with it on my mission. It is also here in great abundance. Until Next Time
Posted by Hamner's at 9:15 PM 2 comments:

This is what happens when Laura, Mary and Sarah are running on Japan time in Indiana. They are up at 3 AM and slap happy! =) Laura: I made this before Sarah and Mary knew what I was doing, and I thought it would be funny to give my name its own slide:).
Posted by Hamner's at 7:30 PM 5 comments: 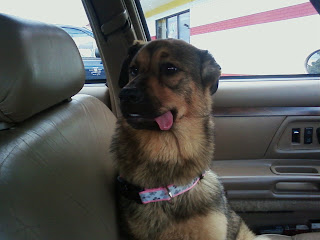 We have adopted a three legged dog by the name of Kita. She is a German Sheperd mix who has brought much happiness and laughter to the family. She is beloved by all who come in contact with her. The girls chose her name long before they found out that Kita is a Japanese word that means the direction of North. Excellent choice in my book.
Posted by Hamner's at 7:46 AM 1 comment:

Hamner's
I am a father of 6 (three boys and three girls) and the grandfather of one amazing little girl. I have a son in Indiana, a son in the Army, a son in Finland and my girls are coming with me to Japan. We aren't your traditional family but we have a lot of love!

The people we miss